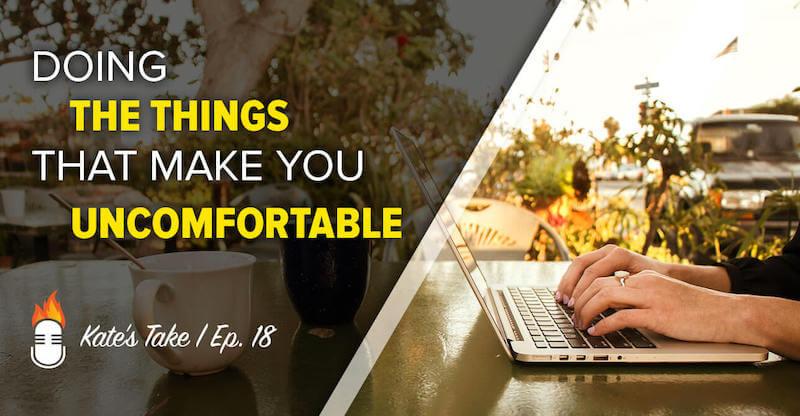 I was talking to a good friend of mine the other night; his name is Andres. We were having a conversation about the things that make us uncomfortable – either physically or mentally or otherwise. You know: running 26 miles in a marathon, getting up on stage and speaking in front of a hundred people… that sort of stuff.

Free Podcast Course: Learn how to create and launch your podcast!

Doing the things that make you uncomfortable

Andres started telling me about a recent experience he had with meditation, and this is how he described it:

One of my first times meditating, I was sitting on a mat and we were told by our teacher that we should stay in each position for a really long time. I tried my best, but I found myself feeling so uncomfortable after a while that I had to keep moving around to stay comfortable.

When my teacher saw that I continued to move around in between poses, he came over to me and asked me why I was moving around so much. I told him it was because I was uncomfortable, that I was feeling pain.

He asked me where I was feeling pain – like exactly where. Was the pain in my knee, above my ankle, in my hamstring?… I guess I’d never thought about pinpointing the exact spot of my discomfort before, but I obliged and pointed to the inside of my knee – exactly where I felt the pain.

After I showed him exactly where it hurt, he told me to concentrate on my breathing, and to envision the feeling on the inside part of my knee – in that exact spot I showed him – as a sensation rather than pain.

I never thought of doing that before, but as I started to practice this sort of mindset shift, I was able to envision the feeling that I labeled “pain” as a sensation, and I didn’t feel uncomfortable anymore.

I continued my conversation with Andres about his experience meditating. Because I’ve never meditated myself, I was interested to hear more about the entire experience. So I asked Andres:

“How long did it take you to practice this mindset shift – focusing on your breathing and envisioning the pain you felt simply as a sensation?”

He told me that it took him several times and a lot of practice; it didn’t happen that very same day while he was sitting there and his teacher was instructing him on what to do. He said it took a few times of him going back and sitting in the same position – feeling a little bit less uncomfortable each time – before he was really able to switch his mindset about pain vs. sensation.

My mind sort of started to wander at this point in the conversation because I couldn’t help but think about Andres’ story and his experience as it relates to being an entrepreneur.

How many times in your experience – whether you’ve been an entrepreneur for 20 years, 2 years, or 2 months – have you been uncomfortable when it comes to doing certain things? Your answer is probably “A lot.”

But often times in these situations, those things that make us uncomfortable are the very things we need to do in order to get to the next stage in our business.

Have you ever noticed how the more you focus and practice doing those things that make you uncomfortable, the better you become at doing them?… and how eventually, you even start to feel comfortable doing them?

And isn’t that what being an entrepreneur is all about?